Bulgogi is a classic Korean dish made from thinly sliced beef marinated in a sweet and savory sauce. Traditionally cooked on a barbecue or over an open fire, but don’t be discouraged! You can easily make this at home!

Going to make this short and sweet. This is a supplementary post for a bunch of other recipes, namely for bibimbap and kimbap (recipe coming soon).

Bulgogi (불고기) is a compound word made from the words ‘fire’ (bul) and ‘meat’ (gogi). It is thinly sliced, marinated grilled meat, usually pork or beef. While bulgogi is usually grilled on a barbecue or a griddle, it can also be cooked in a pan. Of course it won’t have the same smokey taste, but it’s pretty close.

Some tips on making this dish. If you want a nice char then choose a large flat pan and cook in small batches. Allow space between every piece of beef so that no steaming is promoted. If you see the picture above, you can tell that the one on the right looks a bit more ‘saucy’ while the one on the left looks more dry. It’s up to you what type you like but I encourage the left side.

Secondly, I like to slice my own beef but you can buy it pre-sliced at a Korean grocery store. If you want to slice your own beef, make sure you have a sharp knife. Local kitchen supply stores or butcheries might offer knife sharpening services! You can also freeze the beef a bit before slicing to firm it up and make things easier. Just stick it in the freezer for about an hour.

Third, bulgogi is usually made with rib eye. I cook on a budget though so I use top sirloin because it’s always on sale at my grocery store. You can use any cut of beef with minimal fat since it cooks so quickly. Look for rib eye, tenderloin, sirloin, brisket, etc.

Lastly, I really encourage marinating the meat overnight. If you are adding it to another dish (like bibimbap) then you could probably just do a few hours. But if you’re eating it as a main dish, the flavor will be more prominent if you let it marinade overnight. Regarding the marinade, some recipes tell you to blend everything (especially the Korean pear since it burns easily). I ain’t got time for that so I just shake off the excess and it usually works fine.

(And yes a Korean pear is traditionally used in this marinade to help tenderize and add a hint of sweetness).

That’s about it! Comment below if you have any questions, otherwise, here’s the recipe! 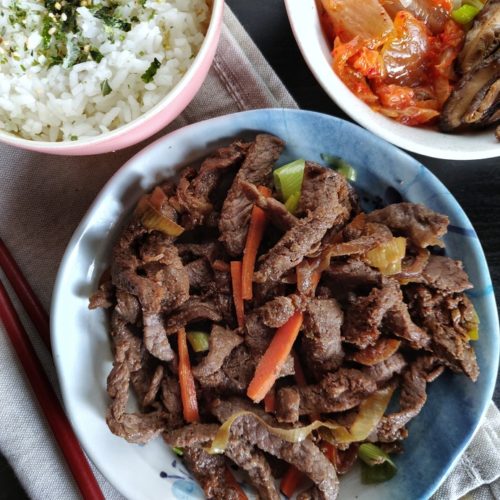 * Do not add carrot if you’re making to use in bibimbap since that recipe requires cooking carrots on the side. You can see that there are no carrots in the pictures I posted because I was cooking this for it. ** I used a ziplock in this photo but I’ve started to use reusable silicon bags to marinade food. I encourage the use of these or in a closed glass container. *** Use either a cast iron skillet or a non stick pan. Don’t use a pan that you know burns food easily.

If you make this comment below or use the hashtag #izzypreps on Instagram. I’ll take a picture of a bulgogi smiley face and send it to you lol.

Want recipes delivered to your inbox?